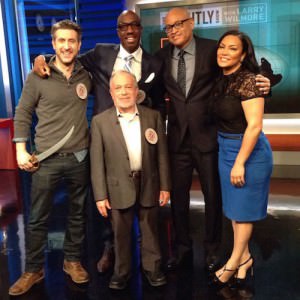 Robert Reich is one of the more respected members of former President Bill Clinton’s administration. He was a major driver of Clinton’s platform during term one (1992-1996) and left at the end of that four-year term to spend more time with his sons. He’s never been a particularly controversial figure in spite of the doings of his ex-employer. (Reich got out before the Monica Lewinsky scandal exploded and ate up most of Clinton’s second term.)

That’s why it was surprising to many when he said something that really got a certain subset of students — and quite a large one at that — furious on a recent episode of Larry Wilmore’s “The Nightly Show.” The short version? Reich wants to ban fraternities. All of them. Over the weekend, he doubled down on his criticisms.

“I’ve been getting angry responses to the view I expressed on Larry Wilmore’s ‘The Nightly Show’ that college fraternities should be abolished. I still think I’m right. There are exceptions but for the most part fraternities are elitist, exclusive, and privileged. They have nothing to do with higher education. And they’re periodically mired in scandal involving hazing (such as the University of Wisconsin-Madison frat’s degrading hazing); racism (the video of Sigma Alpha Epsilon members calling for the lynching of African-Americans); sexual assault (the University of Maryland frat brothers’ pro-rape emails, and allegations of drug dealing and sexual assault in a North Carolina State frat); degradation of women (Penn State fraternity’s secret Facebook page for sharing photos of nude passed out women); destructive drunkenness (University of Michigan frat brothers destroying a ski resort in a drunken rage). The list goes on, and this is just in the last few months.

“Some say ‘boys will be boys’ and if they’re not in a fraternity they’ll do all this somewhere else. Rubbish. A much-cited 2007 study shows fraternity members are 300% more likely to commit rape than non-affiliated students (this was the third study confirming the same data.) A Harvard School of Public Health study indicates just living in a sorority house makes a woman three times more likely to be raped. Some say I’m disregarding freedom of association, and that college students have a right to hang out with whomever they wish. Well, yes, but most fraternities depend on university recognition for direct subsidies such as land or buildings and indirect benefits such as tolerance of underage drinking. Others say fraternities (and sororities) build character and do many charitable things. Yes, but so do many other college activities that don’t have the downsides of fraternities.

“The college fraternity culture brings out the worst. Fraternities should be abolished. Now.”

Robert Reich makes a good case for the end of fraternities while generalizing that “there are exceptions.” He does not indicate an alternative for the exceptions — the ones that are responsible and do good work. How do you abolish the frat system without punishing those individuals?

The comments drew a mixed reaction from Raw Story commenters.

“I was never interested in Frats but I think banning them is a little over the top,” said one commenter. “Perhaps we should ban the ones caught doing egregious acts?”

“Racism and sexual assaults are not the only problems with frats,” observed another. “Access to databanks of exams, papers, and other methods of cheating are also reasons to shut them down. I can see how a private university/college should/would keep them but they should be shut down at all public colleges.”

A third: “Never been in a sorority but banning greek orgs is not the fix for this. Idiots will just go be idiots in standard university dorms or off-campus housing. What would be better is if frats/sororities had much stricter community service requirements and a slightly higher minimum GPA to remain in. If the students have to work harder and do more they’ll be too busy to party all the damn time. And also, mandatory bystander training for rape awareness. … Wanting to surround yourself with people who look like you, act like you, and come from similar backgrounds to you is entirely antithetical to the point of living on campus at college, but whatever. If they want to do that, why shouldn’t they be able to? Being an a**hole isn’t against the law, and some people really want an (ugh) pre-selected friend and networking group they’ll stay in touch with for the rest of their lives. It’s not ALL bad.”

Some outright disagreed with Reich’s assessment finding that it goes too far to “fix” a problem that doesn’t apply to every group, particularly this commenter: “As a fraternity man myself, I disagree with Reich’s sentiment. (And being a fraternity guy, I’m no less appalled at the recent high-profile activities that have come out about certain chapters across the country.) … My fraternity helped me through a lot of hard times as a freshman, and gave me a wealth of support. Heck, they didn’t even pressure me to drink alcohol, as the old stereotype goes.”

While it’s clear that Robert Reich is sticking to his guns on the ban fraternities comment, it’s unclear what sort of fallback that would have on existing frats and sororities as well as alumni associations across the country. Reich does make some good points on the tendencies that these groups have towards antisocial behavior, but is banning them the answer? And if it isn’t, what would you say is the answer? Sound off in the comments section!