High School Dropouts Weigh In: This Is Life 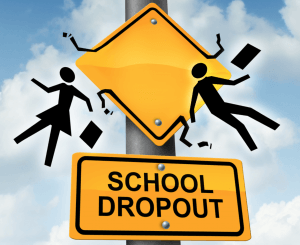 High school dropouts arrive at their decision for a number of reasons. Some goof off too much and pursue other interests, while a large number are victims of circumstance. But what happens after that? Is there life after the decision to drop out of school, and if so, what can one expect? This was the question that one redditor posed recently, and it took off with more than 3,000 responses. Here are some of the most important ones if you’re weighing this decision or if you have hope of getting your GED.

1. “Pretty badly if I’m completely honest. I do have a job which I enjoy for the most part but it took me far too long to get it. People hold a different opinion of me when I tell them and it’s generally a bad one. I just feel as if more opportunities would have been granted to me had I finished.

“I feel sort of incomplete in a way, and sometimes I actually get kinda depressed and upset at myself for not sticking to high school, and the fact that I can’t change that I chose not to get to the end of it. Oh well.”

2. “Long story short I dropped out because it was either work or starve due to [bad] home life. Got my GED IMMEDIATELY because I knew not having it would be horrible when it came to getting a job later in life. I own my own home, drive a nice car, and have enough money in the bank for a lengthy emergency if need be. I never went to college. … Bottom line: I’m ok. I’m not a millionaire but I’m not starving either. I’m surviving. I’m happy. That’s all that matters.”

3. “A tale of two cities: My dad never graduated high school. He went on to become a licensed towboat pilot. Stayed with the same company for 30 years. Made $175K a year, was given a ‘working severance’ of $200K when the company sold, the new owners kept him on at the same salary. He has everything he could ever want and will retire in 2 years with a little north of $1.2 million in savings/401K . He refused to let me get my license when I worked on towboats because he didn’t want me to get ‘stuck on the river.’ I graduated high school and college and have a meaningless job and make less than $40K a year.”

4. “I dropped out 6 weeks before graduation. I’d gotten kicked out of my house because a teacher saw bruises on me from a fight with my step-father and reported them to the nurse who reported them to the police. Kinda hard to go to school when you don’t even know where you’ll be living the next day.

“I got my GED a couple of months later and went to college for a year. I had to leave school because of money. I wasn’t getting any help paying for it, and the school was too expensive.

“I had a 2nd back surgery that left me in a wheelchair in 1997. I started getting disability in 1998. I took a medical transcription course and started working in 2002/2003 and got off SSDI. In 2009/2010, my disability and pain increased quite a bit, so I had to stop working and got back on SSDI.

“TL;DR: My life sucks beyond the telling of it, but not because I dropped out of high school.”

5. “At first I really thought all dropouts were lazy and losers, until I was in a situation that forced me to drop out. When I went around my classes and getting teachers to check off my drop slip, I was given a lot of grief about it. It was so hard not to grab my math teacher by her hair and not scream in her face ‘I walked three [expletive] hours from the homeless shelter to get here, I can’t finish school, go screw yourself.’ I just think unless you’ve been in that tough situation, you don’t understand. Plus the amount of kids who drop out because they just don’t give a [expletive] is too high, giving dropouts in a bad situation a bad name.”

6. “I have a full time job doing something I love, I work along people with college degrees and in some cases make more than them. On the other hand the journey has been twice as long and twice as hard. For years it was all ‘whatever work I can get’ types of jobs. As of late I have been thinking about getting a GED and taking some college courses, I only recently felt ready.”

7. “Dropped out of school because I was skipping too many classes to go and smoke marijuana with friends. Then got so hooked on marijuana that I alienated myself from any friends I had. Now I’m 27 with no friends, a dead end job, and clinical depression. Now I’ve been so anti-social for so long that I’ve forgotten how to make friends and be a general decent human being.”

8. “I think the common theme on this thread is IT or emerging industries in general. If you have a passion and skill in an emerging industry, then primary and secondary school doesn’t seem to mean that much. Many of the comments I read on this post suggest that people who dropped out went into IT. This is how it worked for me.”

9. “I was kicked out of high school for missing a string of classes I didn’t need, in my final year. With the time I missed, I was putting extra hours into my jobs. I was one credit away from graduating.

“The vice principal that did it was very smug, and laughed at any argument I had. That really put me off education for a while.

“Things are going pretty great for me now. I’ve been cooking since that year, and it’s the one job I’ve never gotten tired of. I’ve worked and learned from a lot of talented chefs, and at this point I’m running a kitchen. I seriously love my job, and it’s what I’d be doing whether or not I’d graduated.”

What do you think about the stories of these nine high school dropouts, and do you think that it’s still possible to get by in the U.S. without a diploma or college degree? Sound off in the comments section.