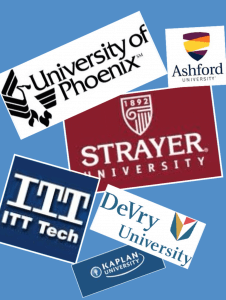 If you are enrolled in for profit colleges and pursuing your certificate, associate or bachelor’s degrees, then you will probably see a decline in earnings and higher debt five to six years after leaving, compared to your earnings before enrollment. This comes by way of a study released Monday (May 30) that combines data from the U.S. Department of Education and the Internal Revenue Service.

Subjects were based on enrolled students who were receiving federal aid and on income levels from about 1.4 million students between the years of 2006 and 2008, so it was quite the large data set.

The use of federal tax data allowed “for more accurate measures of employment and earnings than the self-reported survey data used in most previous studies of the sector,” the report stated.

Most for profit enrollees work prior to acceptance and enrollment, offering a pre- vs. post- breakdown.

Stephanie Riegg Cellini of the Trachtenberg School of Public Policy and Public Administration at George Washington University and Nicholas Turner of the Office of Tax Analysis at the U.S. Department of the Treasury, were the masterminds publishing through the National Bureau of Economic Research, linked here.

Cellini and Turner admitted their discoveries were “significantly due to the large share of students at for profit colleges who leave without the certificate or degree” they are seeking, “ending up in many cases with significant debt,” according to the website Inside Higher Ed. Finishers usually fared better, “but only about 30 percent complete associate and bachelor’s program,” the report stated.

The period studied also coincided with the economic plunge of 2008, and this may have potentially, and temporarily, depressed wages and job opportunities. As Inside Higher Ed points out, there has been an increase in closings for some for profit colleges, followed by reforms in admissions and enrollment policies. More from the report:

“[W]e find that for profit students experience lower earnings effects than their public sector counterparts, a result that holds even after accounting for differences in student demographics and programs of study,” the study states. “Separate analyses of the 10 most popular fields of study reveal that for profit students experience higher returns than public students in only one field (cosmetology), yet none of the top ten fields can be shown to generate positive total earnings gains for for profit students. … The negative earnings effects we find are troubling given the debt that students incur to attend for profit institutions. Examining the distribution of average annual earnings effects and average annual debt payments reveals that the vast majority of for profit students experience both higher debt and lower earnings after attendance, relative to the years before attendance. Finally, among certificate students we find that despite differences in public support for higher education across states, in all 50 states public support for higher education across states, in all 50 states public institutions reveal higher earnings and lower debt than local for profit institutions.”

Counterpoint from For Profit Colleges and Their Supporters

The counterpoint from Steve Gunderson, president and CEO of the Association of Private Sector Colleges and Universities, questioned the findings, calling the methodology “an extension of the flawed logic behind the gainful employment regulation — it looks only at short-term earnings and not at the lifetime benefit of higher education to a new traditional student and their family.”

Gunderson touted career education as “the most direct pathway for a new traditional student to the middle class — without a career focused degree or certificate, these students would not have an opportunity to improve their earning potential.”

He continued: “The fact is that others in higher education simply do not serve new traditional students and those that do have lower graduation rates than our sector. If we are serious about advancing economic opportunity for all, we need to work collaboratively across all of higher education to focus on what works and doesn’t work and provide access, opportunity and outcomes to all Americans seeking to improve their livelihood.”

The study and the counterpoint certainly got people talking with one commenter at Inside Higher Ed, Steve Foerster, pointing out that the problem with the term “for profit” is that it “lumps together the publicly-traded behemoths that this study is actually targetting with low cost distance learning schools that do not leave their students in debt and don’t even participate in the federal financial aid system.”

“STOP!” wrote a second anonymous commenter. “This study is ridiculous. I’m not a for profit apologist nor evangelist, but until you normalize for socio-economic and educational backgrounds, evaluate for differences in the curriculum and instruction, and compare the progression of graduates from for profit and not-for-profit, please stop shoveling this manure riddled with self-selection bias. For profits have enough REAL problems to fix.”

What about you, readers? Anyone attend for profit colleges or universities or know someone who has? What has the experience been like — positive or negative? Sound off in the comments section below.