What Would Increasing The Minimum Wage Mean For Students? 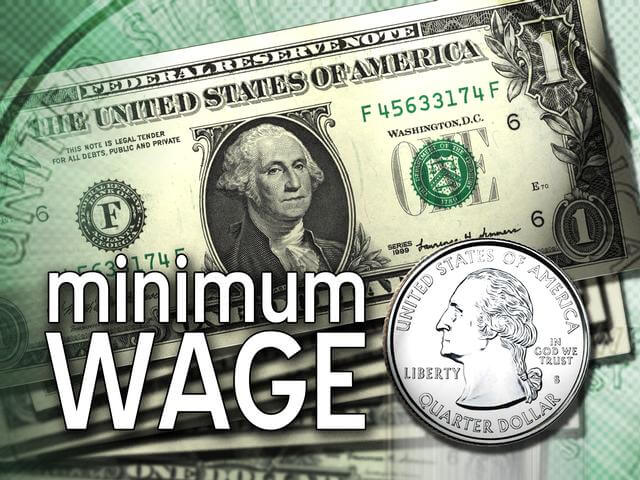 Increasing the minimum wage has been a hot topic of discussion in recent months, especially following President Barack Obama’s landmark executive order that boosted the starting wage of government workers to $10.10 per hour. Currently, in the non-government sector, jobs require a $7.25 minimum wage, and as a recent post in the Frugal Dad points out, some see that as a hardship on students. However, as student Brittany Dunham of JMU pointed out, “there are two sides to the issue.”

“If minimum wage was raised, it would be great to have more free time, because I could work less, but I know that it does impact the economy,” Dunham said. “Personally, I would be in favor of a raise, but there are so many other people that could be negatively impacted by it. So, it is a topic that requires both sides to address it.”

Today we look at the two sides to increasing the minimum wage through a series of pros and cons.

The more likely outcome — and one supported by the Congressional Budget Office (CBO) — is that it would result in a reduction of available positions.

To be precise, the CBO said that increasing the minimum wage could lift “about 900,000 people out of poverty,” but the organization warned that as a result, it might also cause employers “to lay off low-wage workers or hire fewer of them, reducing overall employment by about 500,000 jobs, or around 0.3 percent of the labor force,” the Washington Post reported, adding that the CBO “acknowledged that its calculation is an estimate and said actual job losses could range from ‘very slight’ to as many as 1 million positions.”

In other words, fewer people would have a job, and most employers would be more likely to either: a) do without and take on extra work themselves, or b) hire more skilled workers for the jobs they would have normally reserved for students.

Considering that the unemployment/underemployment rate for the last five years has pretty much stayed above 25 percent of the country (it’s currently more than 27 percent), they would have plenty of willing individuals to choose from if they were forced to pay $2.85 more per hour.

If students are able to make the same amount of money for less work, they could re-budget those saved hours toward the copious amounts of reading and homework that is required to achieve their bachelors and masters degrees. It’s hard to see a downside to this since students often find themselves walking directly from high school and limited responsibility to college and the weight of the world. Being forced to work close to full-time hours the way many do while also juggling a more complex burden of coursework can result in a bit of culture shock. And while we all have to “grow up” sometime, it’s a little unrealistic to ask students to take on so much when we’ve protected them for so long.

Much has been made over the broad earnings gap in the US between the richest one percent and the rest of us. By increasing the minimum wage — a decision with somewhat noble intentions — politicians could actually be making life worse on young people. That’s because the decision will ultimately create an earnings gap not just between the richest and poorest Americans, but also between college students who can get a job and those who find it more difficult when employers stop hiring. While a very small percentage of students could be better off, most will be earning $0 per hour instead of $10.10 or even $7.25.

Even though increasing the minimum wage would likely result in fewer jobs available and a widening income gap between working and non-working students, it could still produce a positive repercussion in encouraging students to plan better for life after high school. Whether that means the student takes a more active interest in a skill or trade or they work harder to earn scholarships while in high school, it could ultimately produce positive dividends for the future of the student’s education and career.

Another unforeseen con that could arise from increasing the minimum wage is setting an unrealistic precedent for life after college. In the Frugal Dad piece, many students who were forced to work two part-time jobs while going to and paying for school, earned incredible life experience as they moved closer towards their degree. Their situations motivated them to enact budgets and balance expenses in a way that an easier work life probably wouldn’t have provided. It may have been tougher for some, but by the time they figured it out, they were much more prepared for life after college than they likely would have been otherwise.

To reiterate what Brittany Dunham said, there are indeed two sides to the issue of increasing the minimum wage. While the tempting thing for most students would be to “take the money and run,” 21st Century students should be more mindful of the unforeseen. Yes, getting a job would clearly produce more money for less work under a $10.10 per hour mandate as the President issued for federal workers, but businesses don’t have the right to print money, unlike Washington. They must make do with what they earn, and anything that cuts in to their profit margin will eventually lead to a reduction in expenses. For most businesses, the biggest expense is the employee, and with more and more workers wanting to find work but unable to do so, the competition for basic jobs typically reserved for college students will get a lot tougher. These are all things to consider when evaluating the decision for increasing the minimum wage. And as students become of voting age, it’s something they will need to weigh when making a decision at the ballot box.