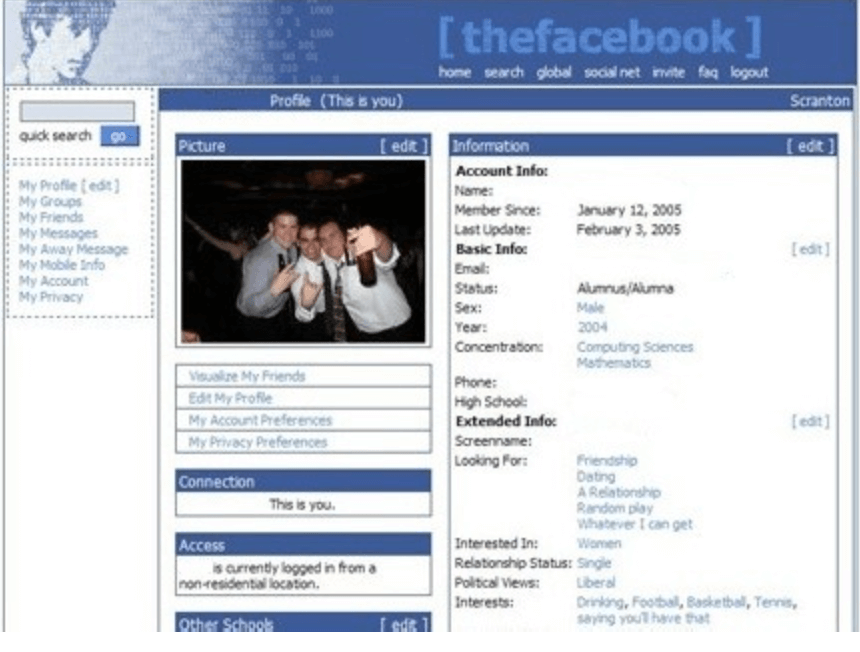 One of the really cool things about any active language is how often it changes to stay relevant with technology and world developments. For instance, since the invention of the Internet, we’ve learned that to “Google” something means to go to a website, type in a search inquiry, and browse through all the millions of results. Twenty years ago, that didn’t exist. But with the rapid pace we’re now keeping, you don’t have to go back 20 years to find sentences that make sense now which wouldn’t have at another point in time. In fact, the reddit community went back 10 years and were able to come up with some pretty awesome examples, so without further ado, let’s look at 10 sentences that you wouldn’t recognize 10 years ago.

*The image you see above is from Facebook circa 2005.

I need to charge my cigarette.

Ten years ago, the e-cigarette phenomenon wasn’t a thing. Today, words like “vaping” have broken through into popular culture. This refers to the vapor that an e-cigarette creates from a flavored, liquid solution, which contains nicotine.

Ugh, the battery died on my book.

EReaders may have been around in 2005, but they were not popular. The idea that you could carry a library of books in your back pocket — or wherever you keep your smartphone/eReading device — was unfathomable. Today, people buy more eBooks than print books as many traditional bookstores continue to close from the disruptive technology.

I can’t get my car to talk to my phone.

Bluetooth is a wonderful thing that allows us all to send data wirelessly from one platform to another. Since its widespread adoption, we’ve been able to take music and podcast apps and basically create our own radio experience inside the car. Most cars that are sold from dealers nowadays have the Bluetooth option, but back in the day, you still had to hope for a CD player if you wanted any selection on the airwaves.

Reddit user: “I was complaining that it was $2/gallon at the time, since I’d cut my teeth on filling my car for $1/gallon. In 2000, during his campaign, VP Gore suggested releasing oil from the strategic reserve to stabilize sharply rising prices. A barrel had nearly tripled from $12 to a mind-blowing $32. We’re creaming our drawers because it’s below $60.”

I store my photos on the cloud.

The Cloud has definitely revolutionized the way we purchase and store things like movies, music, books, photos, and more. While there are definite privacy concerns surrounding anything that you “keep in the cloud” and companies don’t really allow you to purchase things any more, only license them, it’s still an incredible convenience to be able to have access to all that data without junking up your house.

Do it for the Vine!

Vine is a Twitter for videos that allows you to upload six seconds of whatever you can come up with to make an impact online. Today, doing something for the Vine means that you’re going to go through with something — usually a dare or something crazy — just because you think it would make an awesome six-second clip to share with friends and family. (Well, maybe not family.) In 2005, that definitely wasn’t an option.

Did you see my selfie on snapchat?

Selfies, you know. Snapchat, you probably know. In 2005, neither had broken through into popular culture. (Snapchat didn’t even exist.)

“Likes” are a Facebook thing, and while Facebook was around in 2005, it wasn’t what it is today. “Favoriting” was also not a practice in practice. And if you heard “subscribe,” you instantly thought of a print magazine and not an RSS feed.

This was a cNet headline that someone on the reddit feed shared. Today, it makes perfect sense in technological terms. The Galaxy Nexus is a smart device. Android Ice Cream Sandwich is an operating system. Combining the two, we see that the Nexus will be used as a “guinea pig” for testing out the new OS. In 2005, you’d still be trying to figure out what the heck I just said.

Be sure to drop a pin and Tweet your location so we know where to find you! Alternatively, saying ‘hashtag’ anything in a sentence would have made no sense at all.

Yes, 10 years ago, we were still trying to make all of our technologies much, much smaller. That’s what gave us the 3.5-inch screen on an iPhone. But then Samsung started asking “what if?” Since graphics and operation had improved, couldn’t we stand to be toting around a bigger phone than the little monochrome things that fit in the palm of the hand? After the Korean juggernaut started increasing phone sizes again, Apple followed suit, culminating with last year’s release of the iPhone 6 Plus, a 5.5-inch delight.

Language has a lot to teach us about educational development. That’s why we decided to go through with this little experiment today.

And just what, pray tell, is the lesson?

That in order to survive, you have to be dynamic. Languages like Latin are considered “dead languages” because their vocabularies quit producing new words. With English and any other live, active language, there will be change and adaptation. Technology and world events are often the two biggest drivers of this.

If you have any sentences that you would like to add that we may not have recognized 10 years ago, please feel free to add them in our comments section and best wishes as you go with the flow!