‘Useless Degrees’: How Does It Really Turn Out? 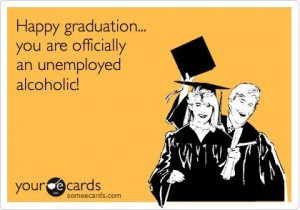 At one time, the words “college graduate” were impressive, but these days, employers aren’t blown away by a piece of paper. They need to see that you have skills that will actually be useful. As such, many degree plans have resulted in what students and educational experts alike refer to as “useless degrees.” Art history and gender studies are just two of the plans commonly referred to in such a negative light. But how does it really turn out for actual people? Someone posed that question to reddit, and here were some of our favorite responses.

1. “I have a degree in philosophy and applied ethics. I have a job in research and I work with my institution’s Research Ethics Board. Worked out pretty well.”

2. “I have an English degree. I got really lucky and landed a job in publishing.”

3. “I had no idea what to do in college, so I panicked and took as many classes as possible. Ended up with a triple major: Spanish, international studies, mass communication. … I’m a cook now.”

4. “English — I’m working as a project manager in healthcare IT. I got lucky and found an employer who doesn’t care what your degree is in, as long as you’re smart and able to learn.”

5. “I got a diploma in special effects makeup – I’ve worked on The Hobbit, Mad Max, Wolverine and I, Frankenstein. … So far, so good!”

6. “English is the butt of a lot of jokes, but I got a job as a financial marketer. It’s not as useless as most think because plenty of places have a need for people who can write and communicate well, and its something that’s really lacking in most companies. It’s all about selling your degree for more than being able to analyse poetry or know obscure facts.”

7. “Doctor of Musical Arts in Trombone. Professor. It turned out fine.”

8. “My friend has a degree in Military History…he’s now a ribbon salesman. … EDIT: he’s really good at Risk & Civilization Revolution though.”

9. “My friend got a BA in History.. right out of college got a job teaching high school in a bad area for $60k/year. I think he did alright.”

10. “I have a degree in art. I just work at Dunkin Donuts. But I do commission work here and there and I update a webcomic regularly. I’d love to turn it all into a living some day but right now it’s just a little bit extra here and there and the webcomic I don’t make anything off of. I designed the mascot for a school band nearby and it’s so well received it’s being moved for being the mascot of the entire school district. So that’s something :).”

11. “My sister has a Film degree and an English degree, she is currently a Channel Manager for a TV station and is a published author.”

12. “I have a degree in Criminal Justice, far from useless, except in my case. I began losing vision in my right during my senior year of college. In the 8 years since I have lost almost all my vision in my right eye. This is a huge problem for my intended career path. I began working for a school as security but I have an interview monday for a much better position in the school, so things might be looking up.”

13. “I have my Bachelor of Fine Arts, majored in Photography. … I now have a government job as photo/scanning technician (digitizing old things to ‘preserve’ them and to put them online).”

14. “I have a History degree from a good uni in the UK. It enabled me to work in Abu Dhabi as a teacher for 3 years, despite not having a teaching qualification, because it was seen that my level of English/intelligence should be pretty good. From AD I travelled much of Asia and had many experiences I would otherwise have missed out on. Upon returning to London I became a PA/project assistant and earn a nice enough wage to be buying a house later this year. It is only ‘useless’ if you believe it so and make nothing of your opportunities.”

15. “Got a BFA in printmaking/bookmaking. Everyone said that would be useless. I got a job in an art conservation lab right after college because of my degree. I still work in conservation and my job is way cooler than anyone I know who got a ‘useful’ degree.”

16. “English Language and Culture in Specialized Communication. Since graduating I have worked in two factories (manual labour), currently unemployed.”

17. “Didn’t know that it was going to be useless at the time. I got a Textile Management degree just after NAFTA passed. At the time that I was looking for work post college, most of the manufacturing mills were packing up and relocating to Mexico. … Other than interning summers, I never used my degree. I waited tables for a year before finding a job in finance. I’m a CFP, make a nice living and have a great family.”

18. “I have a degree in Psychology (surprised to not see many here already). I only have a bachelor’s, I realized too late that I didn’t want to go into any careers requiring further studies like counseling. As for work, I now qualify for all the entry level, low paying jobs that say degree required or preferred but they just want you to have gone to college, they don’t care what for. I have mostly done secretarial and administrative assistant type jobs. I was a part of the generation told that all you had to do was get a degree. I honestly wish I would have either not gone to college or waited until I knew myself enough to know what I was really interested in. … I also live in a relatively small town so there are fewer and less varied job opportunities than there might be in a bigger city.”

You can learn a lot from the people who’ve gone before you and picked up one of the “useless degrees” that are out there. Most of the time, there is a way to find a career doing what you love, but it may require more education, more networking, and more hard work to get there. Good luck!