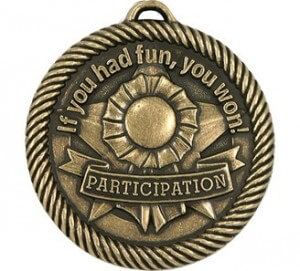 In my state, we have a pretty messed up way of doing things, at least when it comes to the high school football season. Schools are spread out so thin across the 8A classification system, in spite of the fact that we are sparsely populated and not big enough to support that many divisions, that some schools are able to make the playoffs without having one a regular-season game. Yes, every year an 0-10 team gets in to the first round and promptly loses. However, they can stand up and say, “We haven’t missed the playoffs in X number of years.”

I was instantly reminded of this when I came across an article at NPR recently. The article was entitled, “Should Kids Get A Trophy For Showing Up?” Naturally, it led to a number of commenters who felt very passionately about the subject one way or the other.

Stanford psychology professor Carol Dweck believe to the idea to be ludicrous, and shared a recent example to back up her point.

Kids should not be given trophies simply for participating, she says. Dweck explains her answer with an anecdote from a mother she’d recently spoken to.

“Her daughter rarely showed up for her soccer team. She had a terrible attitude,” Dweck says. In spite of that, “at the end she got a giant trophy and would have been devastated had she not.”

Dweck concedes a child shouldn’t have to be the best player on the field to get a trophy, but it should reward something, like improvement or team spirit.

On the flipside of the argument, Kenneth Barish, a clinical associate professor of psychology at Weill Cornell Medical College, said he “thinks kids should get trophies for participation,” adding (from the report):

“This is a minority view now,” he says with a laugh, admitting that he’s had to defend the idea even within his own family.

Barish says he sees no harm in adults encouraging participation with a trophy and that he’s found no evidence the practice leads to entitlement among kids.

We tend to come down on the side of Dweck. For us, the issue at hand is not whether it fosters a sense of entitlement in the minds of children who receive participation trophies only. No, the real issue for us is what it does to the sense of accomplishment that a child or a student feels when they achieve something remarkable. Essentially, when everyone is remarkable, no one is remarkable. That doesn’t seem like a healthy message to send to an educational system that finds itself lagging behind many other developed countries. As it turns out, most of the commenters agreed, offering insightful input that far exceeded even that of the educational experts.

“Your race fees cover the cost of that shirt, it’s not an award,” says J Kessler, using marathon runners as an example. “Personally, I’m mature enough I don’t need a ‘finisher’s medal.’ In a road race, you don’t really have to interact with anyone, so if you have a bad attitude you’re only hurting yourself. Getting an award for just showing up is just stupid. There is no translation for that in the real world.”

An anonymous woman identifying herself as a teacher had this to say:

I’ve taught now for over 20+ years and the only times I’ve truly had a conflict with a student go unresolved was over similar issues. One student thought that simply by turning his work he should get an “A” because that is what he expected. Not the quality of the work- but the fact that he did it. He was a 10th grader. When I gave him a “C” for an average piece of work, he actually transferred schools at the end of the year. I was flabbergasted when his mother told me that my grading was one of the reasons. He believed himself to be brilliant and I was hampering him.

The next year another student was upset when I also graded his work as being average– his mother explained that he’d been used to getting “A”s because he did his work so infrequently.

Give a certificate or a pin to participants and trophies to those who work hard. It’s supposed to be a goal– “Work harder and you can win one…” was what my father told me. I say proudly now that I was a three-season varsity bench sitter. There’s no trophy for that but there are a lot of good memories of playing and working with my teammates that are much more important than a cheap piece of plated base metal on a plastic stand.

Another anonymous contributor responded: “In graduate school at Stanford, I had undergraduate students protest the grade that I determined they had earned under the argument that they had ‘worked really, really hard’ on the paper. The work product, they had been taught through life, meant nothing; just the effort. And, that effort put forth matters for something is arguably a better message than a participation trophy. So whether or not they are still awarded when my son participates, I am one of his parents, and as a parent it is my job to teach him that participating is merely nice; putting forth an honest effort is important; and, doing well is metric on which he will be repeatedly evaluated in life.”

What do you think, readers? Should kids or students get credit in whatever they do just for showing up? Or is it setting a bad precedent that will place our country continually behind in the years ahead? Share your thoughts in our comments section.