Tech Jobs: How ASVAB And Other Non-College Opportunities Can Work For You 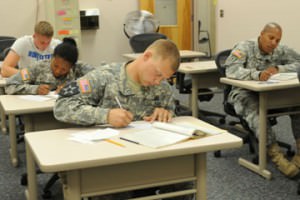 There are many important concepts that going to school, taking standardized tests, and earning a master’s or PhD can still teach you, but when it comes to technology, your options are not limited to these alone. In fact, in the new world, many colleges and universities have done a poor job of keeping up with technology skills and training, and that has led many to develop their own education through hard work and experience.

Getting a tech job without any kind of training has become so common that we often here people ask about ASVAB and other non-college opportunities available for people, who want to get a job in technology. For answers, we turn to the experts. Here’s some insider insight as to what you can do without a degree.

University of Waterloo electrical engineering student Eric Evenchick believes that college “teaches you concepts, but does little to teach you how to do things.”

He suggests choosing “something you want to work with and invest some time and money into learning it yourself.”

“A portfolio goes further than a degree with some employers, and those are the type of employers I’d like to work for,” Evenchick said. “This really depends on what field you want to get in to. Web dev(elopment) has almost no barrier to entry; just install some server/framework on your computer and start building. Other fields can have higher barriers to self-learn.”

Harel Malka, CTO for Glow Digital Media, a platform that specializes in next generation ad management platforms, also believes that a person should teach himself as much as possible. “Pick up a project to do to gain some experience,” Malka explained. “Could be existing open source one, could be your own idea, could be anything.”

“Whenever I interview developers, I don’t look at their education history, I don’t ask them anything about what they learned in uni nor any theoretical CS questions. I just don’t care. I care about their past projects, their creative solutions to problems, their potential to grow and most importantly, their vibe and how would they click with the rest of us.”

“I did the time, but didn’t pass all of the required tests. I didn’t even try to go into higher education. Sometimes I do feel like I missed something by not going into College/University, but its more on a social/cultural level than academic,” he said.

Whatever he missed, it sure hasn’t slowed his professional progress. In addition to his current CTO position with GDM, he has been in the software industry commercially since 1996. His career has spanned from Tel Aviv to San Francisco to London, and has included founding Freecrm.com, co-founding kadoink.com, and helping numerous other startups to launch along the way.

If it takes a secret sauce of college and testing to starting one’s own technology company, no one gave that memo to Jason McFarlane. He launched Startersoft as a teenager four years ago. Today, it supports five people. McFarlane says that one of his favorite quotes comes from Virgil — “Fortune favors the bold.” It shouldn’t be any surprise that his major piece of advice is to start a technology company.

“Instead of borrowing money to go to college, I started a company as a teenager that now supports around five people and counting,” McFarlane said. “You don’t have to be a business genius to succeed but make sure you are so committed that you’ll keep persisting through every failure.”

The company’s growth was born from McFarlane’s persistence, his largely self-taught programming skills, and, yes, the boldness to circumvent the traditional methods to success.

Get Real Experience Wherever You Can Get It.

Reiterating what McFarlane and Malka said, Neville Kuyt recommends getting real world experience however you can. And Kuyt would know about this sort of thing as his LinkedIn profile reveals a history with a list of top-tier companies that include AKQA, Heineken, and PA Consulting Group.

“Most people who recruit technical folk go through a long, long list of applicants (even in these times), and are looking for ways of getting that pile or resumes down to the most likely candidates,” Kuyt said. “Some use a college degree as a quick way of dividing into yes and no. This tends to be true in the more corporate, formal environments.”

“My strategy is a little more balanced — I’m still trying to get the list down to a manageable number, but I look for reasons to put a resume on the Yes pile, rather than the No pile. Those reasons include a well-written resume — I am a bit of a snob when it comes to written communication — concrete achievements, and an obvious ability to learn.”

Kuyt added: “You can demonstrate those things through a college degree, but I actually prefer real experience — if not in a paid gig, then in an open source project.”

Jeremy Wilson agrees. Wilson is the CTO at Keek, a service that allows one to share quick video updates with friends. “I am personally a college dropout and learned everything I know on the job,” he said. “However, this was back in the dark ages of the Internet (circa 1992) and back then, even knowing the word ‘Internet’ was enough to get a job.”

“I would recommend learning as much as you can on your own, but try and supplement that with some certifications — Red Hat, for instance, offers many different certifications.”

(Red Hat bills itself as “the world’s open source leader” and is “a community-powered approach to provide reliable and high-performing cloud, virtualization, storage, Linux, and middleware technologies.)

By taking the ASVAB, you can get a nice jumpstart on a career in technology. All branches of the Armed Forces use the ASVAB as a placement indicator for which field of training you would be best suited for. If you have a passion for technology, then this will show in your scores, and it can fast-track your career development while also making you eligible for financial incentives, such as the G.I. bill.

If college and standardized testing isn’t your thing, you do have options for developing a career in technology. However, it’s important to note that you’ll have to work just as hard as you would in any other blossoming career field — perhaps harder — to set yourself apart from the competition. And when it comes to competition, you’re now facing a global workforce. Bypassing tests and college may seem like the easier route to go, but with technology, it isn’t — not if you want to be successful.