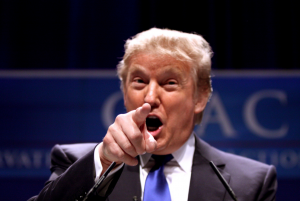 The idea of students learning anything from the Donald Trump Twitter account may seem unorthodox, particularly if you are one of the many college students throughout the United States who find his beliefs and actions to be diametrically opposed to their own.

But if you are ever going to go anywhere in life, you have to learn how you can learn from everyone, including those from whom you disagree.

Now, that is not to say things that teach are always positive. You can learn plenty of lessons from the negatives in life. That said, the following article is not to get into judging the President. Rather it’s to offer a way that you, good student, can make the most out of the Trump Twitter account, no matter where you are on the political divide. Here are some of the most obvious lessons.

Trump Twitter Lesson No. 1. Spelling really doesn’t matter as much as ideas.

There is a reason the teaching of spelling has eased up in recent years. While it’s still a good idea to strengthen this muscle, technology does a lot of the heavy lifting for us.

What @realDonaldTrump understands is that most people are bad spellers, so a lot of mistakes will go unnoticed. How else do you explain the fact the man is still President after his horribly spelled tirades against Marco Rubio or his use of “unpresidented” for “unprecedented”?

Clearly you want to be better than the average person in this area, but if you have ideas that connect with people, you’re going to be just fine.

2. Right or wrong, people are tired of apologizing for who they are.

You could make the case that @realDonaldTrump isn’t completely aware of who he is given the account has spat out a number of contradictions over the last several years.

Case-in-point, President Trump took the bold action of throwing missiles at Syria for a deadly chemical weapons attack a few years after telling then-President Obama it would be foolish to get involved in the civil war there.

President Trump’s mind, that’s what changed. When called out on it, he stood by his decision and said, basically, we’re not getting involved in any conflicts; we’re just not going to stand for the use of chemical weapons on innocent people.

It was a move that even some of his critics praised, though most were only too happy to point out the contradiction.

Aside from that, Trump has been pretty unapologetic towards those with whom he has a problem. Take Rosie O’Donnell or Kristen Stewart or any number of other opponents — political or otherwise — that have dared to cross the Donald.

You can count on one hand the number of apologies Trump has offered for the off-color remarks he’s made and still have more than half your fingers left over. (There was the 2005 Access Hollywood tape, and that’s all we can really think of at the moment.)

Bottom line: as a student or a graduate, you need to take a stand whether you’re right or wrong on something, and then you need to stand by it. If you’re wrong, learn from it; but don’t think you automatically owe everyone an apology or even that an apology will do any good. That’s not to say you should never apologize. Just that it shouldn’t be your first response for contrary thinking.

3. No matter how many enemies you make, you will also find allies.

If President Trump holds 40 percent support as he has been doing since his election, then he will probably cruise into the White House for a second term (if he wants it). That’s because of a couple of different factors.

Firstly, America uses the electoral college, and while he may not have won the popular vote, the math in the EC definitely favors him. As long as he keeps his base happy, he could be the first ever two-term President of the United States to never win the popular vote. How? That’s where we get into reason number two.

The country is so fragmented and idealistic now that there aren’t enough in opposition to Trump who can find common ground for a consensus opponent.

Where are we going with all this?

Quite simply, Donald Trump is one of the most polarizing figures to ever live within the U.S. of A. He is very bold and widely unpopular (if looking at recent polls), but his boldness and his willingness to run from popularity while others appear to chase it through playing it safe and constantly hoping not to offend have put him in the White House.

The lesson is that you will always find your team provided you accept the mantle of leadership. Your team may not always be enough to give you victories, but you won’t live life alone.

4. You can control the narrative in how others see you.

How many negative news stories have there been about Donald Trump since he stepped into the White House? (Forget everything that came before.)

Yet he has largely neutered the traditional media through the @realDonaldTrump account; and yes, if you appreciate things like factual information, checks and balances, etc., this might disturb you to no end. But you can’t deny that he has used technology and communication channels to take back his narrative and communicate directly with others.

It served him well through the primary, the general election, and through the continued support of his base.

And the final Trump Twitter lesson: There is intelligence, and there are street-smarts. Both are important.

Donald Trump was probably not the best student going by what we’ve seen unfold in the verbiage, the spelling, and the sometimes half-baked ideas that he puts out into the world.

However, he’s not stupid. In fact, if you think that, you’re probably closer to it than he is. You don’t get into the White House with the ability to read your friends (voters), your enemies (the media), and others so well.

As pundit after pundit continued to rule him out, he seemed to understand the country better than anyone and used that understanding and the powers of persuasion to upend Hillary Clinton’s bid for the White House.

Clinton was the textbook intellect, but she didn’t get people. Trump did, and he knew simplicity would help him connect and win over support.

To say Trump is stupid, is to say he accomplished what he did by accident. President Trump is no accident.

It can be tough to look at the Trump Twitter account and think, “Hey, I can learn something from that,” if you didn’t vote for him or hate the man’s guts. But the minute you start shutting out ideas or people because you disagree with them, you waste everything you can learn from them, for better or worse. It’s something you truly do at your own peril.