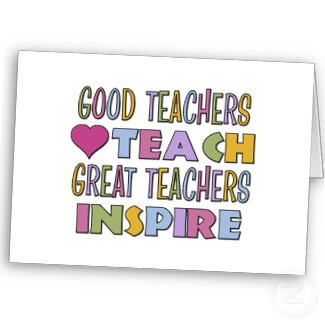 The greatest teachers of our country have shaped understanding, policy, education, and the world-at-large. Their lessons have outlived their lives, and we will continue to build on their work as a society for generations to come. Today we thought it would be a good time to shine the spotlight on what these individuals think about education, life, and more. Enjoy!

2. “When you have mastered numbers, you will in fact no longer be reading numbers, any more than you read words when reading books. You will be reading meanings.”

—W.E.B. Du Bois, a great African-American thinker of the 19th and 20th Centuries

3. “It’s a great mistake, I think, to put children off with falsehoods and nonsense, when their growing powers of observation and discrimination excite in them a desire to know about things.”

4. “If the rate of expansion one second after the Big Bang had been smaller by even one part in a hundred thousand million million, it would have recollapsed before it reached its present size. On the other hand, if it had been greater by a part in a million, the universe would have expanded too rapidly for stars and planets to form.”

—Stephen Hawking, physicist and author of A Brief History of Time

5. “Learn from today, live for today, hope for tomorrow. The important thing is not to stop questioning.”

6. “It is not easy to be a pioneer — but oh, it is fascinating! I would not trade one moment, even the worst moment, for all the riches in the world.”

—Elizabeth Blackwell, the first woman to ever receive a medical degree from a school within the U.S.

7. “There will be no free rides, no excuses. You already have two strikes against you: your name and your complexion. Because of those two strikes, there are some people in this world who will assume that you know less than you do. Math is the great equalizer … When you go for a job, the person giving you that job will not want to hear your problems; ergo, neither do I. You’re going to work harder here than you’ve ever worked anywhere else. And the only thing I ask from you is ‘ganas’ (or ‘desire’).”

—Jamie Escalante, inspiration for the film Stand and Deliver

8. “Success in life is founded upon attention to the small things rather than the large things; to the everyday things nearest to us rather than to the things that are remote and uncommon.”

—Booker T. Washington, born a slave, went on to create his own highly regarded school for African-Americans

9. “His daughter returned from her boarding school, improved in fashionable airs and expert in manufacturing fashionable toys; but, in her conversation, he sought in vain for that refined and fertile mind which he had fondly expected.”

10. “In a real sense, people who have read good literature have lived more than people who cannot or will not read. It is not true that we have only one life to live; if we can read, we can live as many more lives and as many kinds of lives as we wish.”

—S. I. Hayakawa, educator, author, politician, known for his book Language in Thought and Action

11. “If the curriculum we use to teach our children does not connect in positive ways to the culture young people bring to school, it is doomed to failure.”

To read up more on the American authors presented in this article, we recommend checking out TakePart’s look here.

America’s classroom voices are still an important part of our future. If we can start doing more as parents and politicians to support them instead of denigrate them, then the legacy of our greatest teachers will live on for as long as our republic stands — and likely well beyond. Who are some of your favorite teachers, and what quotes and advice have they shared in influencing your education. Share your thoughts in our comments section.