12 Tips For Learning A Second Language 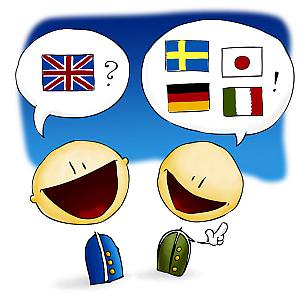 A second language is increasingly important to the long term marketability of any individual in today’s market. With the world turning into a global marketplace, it’s becoming more and more common to compete for jobs not only with native language speakers but also with foreign language speakers. The Internet has brought everyone together, but it has also forced us to up our games, and learning that second language is unique enough to make one stand out. Here are 12 tips for helping you get there as told by the second language experts at reddit.

1. “You need to let go of your preconceived notions of pronunciation and phrasing. Listen to any second language like you listen to music. Listen for phrasing and intonation. Try to mimic the tones as well as the sounds.”

2. “Not language specific, but learn the lyrics to recent songs. A lot of times they include very current usages of words in context. You can recall the song in a case where you forget a vocabulary word. Bonus: sometimes you’ll sound poetic. Caution: for that same reason, you can sound like an idiot… just think of how beautiful and idiotic English lyrics can be.”

3. “You should look into the app duolingo. I’m not sure if it supports [all languages], but it’s a good help when trying to learn a second language. (I’m using it to learn French).”

4. “Talk and LISTEN to the language you want to learn as much as you can. When I was young, my parents wanted me to learn English (thanks Mom and Dad!). My brother and I hated it: they only bought us English Disney movies. We watched them anyway and it certainly helped a lot.”

5. This applies to learning Japanese, but it could be adapted for several languages: “Give yourself a set amount of time per day where you’re immersing yourself in it, through fun means. Watch Japanese dramas & tv talk shows, listen to Japanese music. If you have a Japantown or Little Tokyo anywhere near you, go there & listen to conversation and get used to the sight of common words on signs & such. Watch Japanese movies, first with subtitles, and then without so you can pay attention to rhythm & tone & emphasis. Read manga that has the hiragana pronunciation next to all the kanji. If you want to take it to the next level, change your computer OS or phone OS to Japanese. I do this sometimes when I feel I’m losing my skills.

“People here have mentioned finding conversation partners – YES. There’s nothing like immediate feedback and actual, real practice talking. Meet-up groups are great for this, or find Japanese friends online who you can Skype with. (I haven’t gotten enough of this, so while my listening & reading are very good, my ability to form sentences leaves much to be desired. Apparently I sound like a child when speaking the language.)

“Do this stuff WHILE taking some kind of formal instruction, either though online courses, community college, Rosetta Stone, or tapes & books. Whatever works for you & how you learn. This has been the only way I’ve managed to get grammar figured out, but everyone’s different.”

6. “Learning the vocabulary is not the first thing you should be doing. Start with the grammar.

“Learn the techniques to coin different types of sentences.

“And most of all, make sure you have some [native language person] to talk frequently to.”

7. “Spend as much time as you can listening to native speakers of the language. Watching … shows, even with English subtitles, is going to really help your pronunciation, colloquial language use, etc. Even better would be conversing with native speakers, but that can be harder to arrange.”

8. “… when I was learning French I would put postit notes on things and write the french word for them on it, for instance, every morning I would walk down the stairs to the kitchen, open the fridge and get some milk out, open the cupboard and get a bowl and cereal out, sit down at the table: postit notes were on the kitchen door, fridge, cupboard, where the bowls are and table.”

9. “Flash cards seem to help me in conjunction with constantly channeling energy into annoying roommates/friends/family with your greetings and formalities and whatnot.”

10. “Actors are known to become virtually fluent in languages they speak for roles, even fictional ones.

“When you are repeating phrases to learn them, try to pretend you are that person. If it’s something sad, feel sad. Shocking? Gasp and lean in. Don’t worry about overdoing it, no one is watching (I hope); in fact, exaggerate! Don’t just speak Japanese, BE Japanese. Watch body language and learn customs and mannerisms. Copy them. Get at the subtext.

“The idea here is make a direct connection with the context of the words. Instead of filtering them through your established self. No matter how dull the topic, a little authentic flourish goes a long way.”

11. “One of the best ways to start is to brush up on your English grammar. You won’t understand theirs if you struggle with ours. I went through a three day crash course on English grammar and rules before I went on a year long course in Farsi and it helped immensely.”

12. “If you can take a linguistics class, I highly recommend it. It helps with identifying and forming sounds by explaining how different types are spoken, and gives you all sorts of insights that language teachers don’t know. For instance, did you know that most English speakers aspirate the first consonant in a word, but not the consonants in the middle or at the end? Because of this, most English speakers will mistaken an unaspirated, unvoiced consonant with its voiced equivalent.”

Do you know a second language? What were some of the most helpful tips that helped you get proficient so you could hold conversations and/or write without confusion? Share your thoughts in our comments section below.