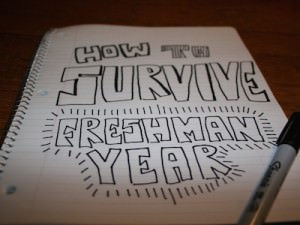 College and high school are certainly two different experiences, and it really won’t take you very long to figure this out. In fact, if you’re about to go to college for the first time this August, then the learning will begin almost immediately. We’ve culled through ancient history — our own pasts — to impart the 14 important life lessons that we learned freshman year. If only we’d listened!

One: You should have started thinking about your future much sooner.

There are probably things that you enjoy doing right this instant, but you haven’t stopped to think of a way that they can be done, realistically, for fun and profit. (And no, cow-tipping doesn’t count as “realistically.”) When I started college, it seemed so far off that a future was something I could always “get around to.” I didn’t realize that it was something I was currently living, or working towards, until I was collecting my diploma and still had no idea what I should do for a career. If you haven’t started thinking about this yet, start now. Ask yourself what you enjoy doing more than anything else, and then try to find a way to make money at it.

Two: No one is going to make you go to class.

The sweet freedom of college caused me to sit out several early morning classes, and I almost always ended up regretting it. From the judgmental glares I’d get from the professor to the late nights of cramming information into my head thanks to a friend’s notes, I always made it harder on myself every time I hit the snooze button.

Three: Sometimes you really do have to open a book.

For many, high school is easy. I felt that way. The reason is that everyone learns at a different pace and high school teachers are forced to “teach to the test” so everyone meets the same standard. It may be effective at getting the school to perform well, but it doesn’t quite prepare you for college. When I got to college and bombed my first few tests, I realized that average wasn’t going to cut it any more, at least for some of the teachers in my field of major.

Four: The Freshman 15 are real if you underestimate them.

Yes, it’s quite common to gain 15 pounds your freshman year. If you’re used to living a physically active life due to sports, for instance, and now you no longer play, then you’re taking in the same calories without the same activity levels. You’ve got to keep your metabolism pumping on your own if you don’t want it to happen. That’s why working out at least four times per week is still a good idea, even if there isn’t a coach or gym teacher there to make you.

Five: There are many ways to screw this up.

Since you’re not constantly being brow-beaten, it’s easy to let college get the better of you. Partying too long and hard the night before an exam, cutting class, “falling in love” with the first person you see, not seeking help from your instructor for classes that are giving you a difficult time — the list is really endless. This is the time to take responsibility for your actions. As a freshman, however, you may be too drunk on freedom to realize it. Don’t let that freedom be your undoing.

Generally, if you had a great time in high school, you may not like your freshman year of college as much. If you loathed high school, then you’re likely to hit your groove. These realities are true because college introduces you to a bigger pool of people, and that pool is more diverse. In other words, it’s easier to find people like you if you’re a bit shy. If you were big man on campus, however, you no longer are, and that takes some adjustment.

Seven: You can do laundry the simple way or the hard way.

Having a set laundry night is a good idea because it can save you money on new wardrobe. Yes, it shames me to say it, but buying a new package of underwear or T-shirt was something I did regularly rather than face down the washing machine. I hated going home, too, but that was a necessity if I ran out of money. By doing laundry one night per week, you can stay clean and get a little studying done in the process.

Eight: Credit cards are not worth the free T-shirt.

It took me a while to cobble together a 750+ credit score after college. That’s because I’d applied to so many cards just because I wanted the free T-shirt. And then when I had the card in hand, it was way too easy to eat out every night, which adds up over four years. Keep things simple at this stage. Don’t apply for a credit card if you don’t plan on using it, and don’t use the credit card if you can’t pay it off at the end of the month.

Nine: Mom and/or Dad did more for you than you thought.

Laundry, bills, groceries, reminding you to pay your bills and taxes on time — yes, Mom and Dad do more than you think, and when they’re no longer there, it all falls on you.

Ten: It’s wise to pay attention to your peers’ experiences with certain professors.

If an older peer tells you what their experiences were like with a certain professor, listen to what they have to say. They’re giving you the keys to the kingdom for what it takes to either succeed or fail in that professor’s class.

Eleven: There’s room for everyone.

Conservatives, liberals, political/religious agnostics, atheists — college is a melting pot of cultures and ideas. It’s not your job to change anyone, but it’s a lot easier to find people with like minds, and to understand your own beliefs a little better.

Twelve: Jobs may be harder to get than you think.

Most of the time, employers don’t want to hire a freshman, even for a part-time position, because they expect immaturity. They want someone with a more proven track record. That means someone who isn’t going to wash out due to partying too hard and not studying. There are also thousands of students to choose from who have a bit more going on than you do. Therefore, don’t expect to get something right away, and if you do, treasure it and do your very best at it.

Thirteen: That first relationship — take your time with it.

You may think you’ve met the boy/girl of your dreams during freshman year, but school and independence are probably going to take you both in very different directions. Besides, most psychiatrists agree that we’re not who we’re going to be until the age of 25. Making a lifelong commitment at 18 or 19 years old probably isn’t the smartest move to make.

Fourteen: Get plenty of sleep.

Sleep is so important to your mind and body’s ability to recover. Value it, make time for it, and give yourself a break.

Outside of getting married and having my first child, college was the best time of my life. It will probably be for you as well, if you’ve decided that’s what you want to do. Heed these lessons and make it a great experience from the very beginning. Good luck!