‘Eat That Frog’: The Best Productivity Advice You’ll Ever Hear 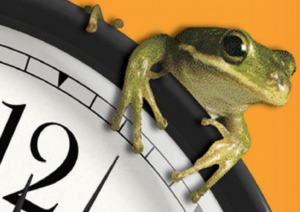 Ever hear the old saying that to be more productive, you have to “eat that frog”? This term originates from the legendary American author Mark Twain. His exact verbiage?

While you may think this is just Twain being Twain, the deeper meaning can change your life. That’s at least what author Brian Tracy thought. His book Eat That Frog! 21 Great Ways to Stop Procrastinating and Get More Done in Less Time expands Twain’s thoughts into some truly actionable advice that you can benefit from whether you’re a student or recent graduate.

It cannot be emphasized enough that you need to read the book for yourself to fully internalize what Tracy is saying. In it, he gives useful tips and exercises that will explode your productivity overnight. Until you get that chance, here are some general principles.

1. Decide exactly what you want.

According to Tracy, “clarity is essential.” He recommends writing out goals and objectives before you begin. While you might be able to tap them out on an iPhone screen just as easily, give it a shot the old-fashioned way. You’ll be surprised what your brain will come up with if you slow down and build that relationship between brain, hand, and page.

2. Plan every day in advance.

If you spend 10 minutes writing it all out and wrapping your brain around some of the specific steps and approaches that you’ll need to use to get those tasks finished, that will translate to as much as 100 minutes of efficiency (1 hour, 40 minutes).

Add that up over the course of a five-day week, and you’ve just gifted yourself an additional 8 hours and 20 minutes of time to focus on the things that really matter in your life.

The Pareto Principle, named for an Italian economist, essentially states that 20 percent of your efforts will account for 80 percent of your results. Tracy encourages his readers to “always concentrate on finding the top 20 percent” and expanding it from there.

Procrastination of any kind means there will be consequences.

When you’re weighing the things that need to be done, make sure that you consider all the consequences of doing or not doing each task.

Perhaps the best advice in Tracy’s entire “Eat That Frog!” experiment is the ABCDE method for evaluating tasks. Tasks that are considered “A” tasks are the most important things that have to get done no matter what. If you have more than one of these in a day, call them “A1” and “A2” tasks.

But don’t ignore them and don’t put them off. Eat those frogs early. The “B” tasks are things that need to be done, but that don’t have as much of a pressing time commitment. Tracy calls these your “tadpoles.”

Your “C” tasks will be those things that you would like to do, but that don’t have any real consequences. “D” tasks are any items you can delegate to someone else. If ya got ’em and have the means to delegate, do it!

And “E” tasks are things that can be eliminated altogether. Each day, list out the things you have to do; assign them the letter grade; and start from the top.

Tracy explains in his book that key result areas are the “results you have to get to do your job well.” Once you determine what they are, work on them all day long.

In the book, he shares the story of a woman, who approached her boss with a proposition: let me focus on just the things I’m best at and delegate these other tasks.

If I double my productivity in six months time, double my pay. He agreed, and she did.

7. Practice the law of forced efficiency.

As Tracy puts it in “Eat That Frog!,” “There’s never enough time to do everything, but there is always enough time to do the most important things.” It’s your job to discover what those things are and force yourself to direct time towards them.

8. Prepare thoroughly before you begin.

Tracy did not create “the six P’s,” but he does use them in the book. They are “Proper prior preparation prevents poor performance.”

The author notes that your skills are becoming obsolete the longer you go without improving them. “The more knowledgeable and skilled you become at your key tasks, the faster you start them and the sooner you get them done,” Tracy explains.

To piggyback on to that, you should always be looking for ways that you might become obsolete; then figure out how you can add whatever experience or expertise that is to your resume.

Tracy advises you to “determine what you’re good at doing or could be good at doing and throw your whole heart into doing those specific things very well.”

No one is perfect. We all have our weak spots. We all have hindrances or “bottlenecks and choke points,” as Tracy calls them, that prevent us from reaching our very best potential.

Analyze your performance, your character, and your daily responsibilities. Figure out what those things are and work out a plan to eliminate them from your life (as much as possible anyway).

For the most daunting tasks or projects, Tracy recommends that you start with a single, solitary step to begin the process and do it. From that, one of two things will happen. You’ll either feel a sense of accomplishment and the rest of the task will seem manageable, or you’ll enter a state of flow that allows you to accomplish the next step and the next and the next.

Before you know it, you’ve started with just one task in mind, and you’re already a third of the way through! Either way, taking one step provides you with the clarity and confidence you’ll need to build forward momentum.

13. Put pressure on yourself.

As Tracy puts it in the book, assume you have to leave town for a month; then work as if you have to get all your major tasks completed before you leave.

The author advises to “structure tasks around your best times.” We’ve all got them. For many, those best times are in the morning. Others work better at night.

Learning your rhythms — the periods of the day when YOU are the most productive — and planning your day accordingly will result in getting more accomplished in less time.

15. Motivate yourself into action.

This can be a really hard one for those of us who are a bit more on the pessimistic side, but Tracy believes it is a necessity to “be your own cheerleader.”

“See the good in every situation,” he writes, adding that you should “always be optimistic and constructive” in the language that you use as you go about tackling a goal or mission.

Perhaps one of the most surprising things about “Eat That Frog!” is that it doesn’t paint procrastination as an altogether bad thing.

In fact, procrastinating on the RIGHT things can make you more productive on the A1 and A2 tasks. The ABCDE method will help you determine what you can and can’t put off.

17. Do the most difficult tasks first.

If you don’t, then you run the risk of expending your best creative energy on the smaller items — the ones you could delegate or even eliminate.

As a result, you’re doing a lot of things, but very little of it matters. Stick with the A1s and A2s, and you’ll likely have more time for the rest. And if you don’t and the world doesn’t blow up, then how much did those lesser items have to get done anyway?

18. Slice and dice the task into bite-sized pieces, and do one small part to get started.

A1 projects become A1 projects because, generally, they’re not easy to accomplish. They often have a lot of moving parts and complicated tasks that are not going to be doable in an hour or two.

However, if you break them down into smaller tasks, it becomes easier to work your way through them in a timely manner with confidence and that aforementioned forward momentum.

This is often how you can knock out the A1 tasks in such a timely fashion. By devoting the crux of your day to them.

Make sure that you, as Tracy advises, “organize around concentrating for extended periods on your most important tasks.” That way, they get the best parts of you, and you don’t run the risk of handing in shoddy work for the most important projects.

20. Develop a sense of urgency.

Life is not always going to give you an imposed deadline, and that’s too bad. Because when a deadline is set in stone, you at least know the endgame and it becomes easier to pace yourself on how to get there.

You have to cultivate enough accountability so that you don’t always need that deadline, and that comes through building your own sense of urgency. Ask yourself what might happen if this doesn’t get done. Play it out to the worst-case scenario.

Then, work on a plan that ensures against it.

We’ve harped on it here before, but it bears repeating. Lots of people think they’re awesome at multitasking. They are wrong. More studies than we can count show significant cognitive impairment in a task whenever a human being tries to focus on more than one thing at a time.

Tracy is also against multitasking and advises that you stick with a single task and see it through until completion if you’re serious about becoming more productive.

Eat That Frog! offers some great actionable advice that you could stand to read and take in before the school year starts. It will serve you well in your classwork and in life. Now, what are some of your favorite productivity tips? Sound off in the comments section below!