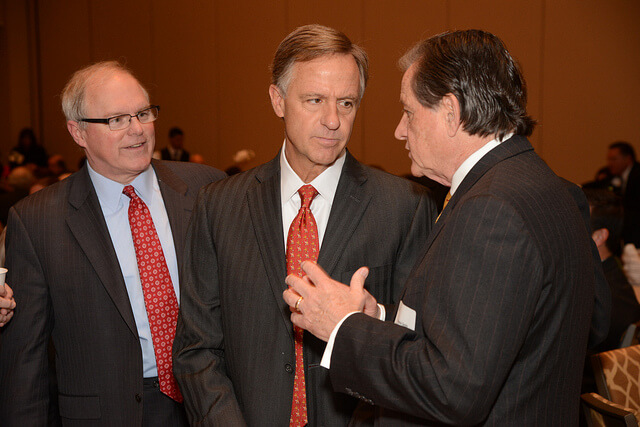 Free tuition may not be such a pipe dream after all, if Tennessee Governor Bill Haslam has anything to do with it. The Republican has proposed a system in his state of jurisdiction wherein every student without a scholarship would have free tuition to any in-state community college.

Haslam alluded to his plan in the State of the State address to the General Assembly on Monday in Nashville. According to the speech, he proposes using state lottery money to fund the endeavor. Since Tennessee is one of the lowest-ranking states in the union for education, Haslam’s plan is getting a lot of bipartisan support from Democrats and Republicans who aren’t satisfied with their state’s reputation. Call it “desperate times, desperate measures,” but if it works out, it could be a mixed bag for Tennessee students and faculty. (More on that in a bit.)

In Haslam’s comments to lawmakers, he said that he would place roughly $300 million into an endowment to pay for two years of community college for high school seniors who have no other scholarships.

The move has been called “awesome” by educational leaders and students alike. National higher education officials are also enthusiastic about the decision, with one telling the New York Times that “it’s the best idea for boosting college participation in a generation.”

One of Haslam’s “frequent foes,” even supports the decision. NPR cited a statement from State Senator Jim Kyle of Memphis: “Quite frankly, you can get just as good of an education in most instances [at community college] and you can do it at less cost to the taxpayer, which means more people can go.”

Still, despite all the hoopla and support, there is a downside, some say.

“Yeah, it looks great,” said Rep. Steve Cohen, who helped institute the state’s lottery program. “But in reality, when you’re working with limited funds, [it’s] not so good.”

Of particular concern, Cohen noted, is the lack of a grade requirement on the proposed scholarship. “You’re going to spend a lot of time and money on people who aren’t going to graduate,” he said.

Furthermore, four-year scholarships would be cut by a thousand dollars for freshmen and sophomores, NPR reports. According to Catherine Leisek of the National Council for Higher Education, “Students who are scholastically prepared for university will be pushed into a two-year system possibly, because of the money.”

Here are some concerns that we have for the free tuition system:

One: It’s hard enough to pay for college without financial assistance, but it’s not difficult to get a scholarship or other financial aid if one applies himself in class, turns in homework, takes the ACT or SAT, and fills out a FAFSA. While college often costs much more than any of those items will allow, depending on where you go, the current plan does little to reward students who’ve taken advantage of every academic opportunity available to them. Instead it shifts the majority of assistance to students who have no scholarships whatsoever, which immediately raises concerns for the probable return on investment.

Two: There’s a distinct possibility that “good students” could do the math and decide it’s more financially advantageous to slough off high school in order to get the free money and only worry about how to pay for the last two years of college later on. Needless to say, this would place them at an academic disadvantage for getting into a good undergraduate and/or graduate program. Plus, anything that delays intellectual development will place Tennessee students further and further behind the rest of the country (and world).

Three: It essentially funds education through a “poor man’s tax.” By placing the burden of education on the backs of the people who are least able to afford it, the system effectively exonerates higher-tier tax brackets from taking part in solving the educational problem. And yes, it’s true that the lottery can be played by anyone, but data ream after data ream proves that it’s usually the people with the least amount of assets who buy the vast majority of lotto tickets. After all, wealthy individuals typically place their funds in investments with far greater odds of success and a proven track record. Rarely do you find them in a gas station buying up Powerball tickets. They don’t need to operate that way, and they definitely don’t need the money.

Four: It could negatively impact the amount of quality teachers available. How so? Let’s go back to number two. Good students sloughing off because they’ve done the math and realize they get a better deal if they don’t try so hard, can only further stress teachers who struggle against poor administration, an out-of-touch state department, and entitlement-minded students who often go undisciplined by non-participatory parents. Obviously, this isn’t how it goes 100 percent of the time. There are plenty of exceptions. But quiz any good teacher who gets fed up and leaves the profession, and at least one (probably all) of these will be cited as the reason(s) for leaving. Dis-incentivizing high school for students who already aren’t working to their full potential and then incentivizing sloughing off for stronger students would likely make life an even bigger nightmare for the high school teacher. It would also cause these students to be further behind as they move past high school.

Providing free tuition isn’t the worst idea when it comes to making the cost of post-secondary education more affordable. However, the Tennessee plan seems like it would do much to fuel entitlement while detracting from achievement. Simply getting people to “show up” for college is not a good long-term plan for solving educational issues that run as deep as those you’ll find in Tennessee. Furthermore, turning to the low-income citizen to fund the program is somewhat questionable, and making life inside the classroom harder on teachers will likely detract from preparing these students for life outside the hallways. What do you think about the free tuition plan — is there a more effective way to implement it?