Happy ‘Back To The Future Day,’ Everyone: What Part II Got Right 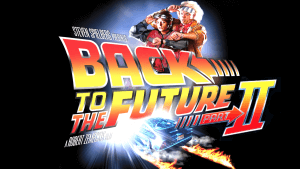 You probably haven’t been able to go anywhere today without encountering someone wishing you a Happy Back to the Future Day on social media or in person. The greeting, of course, comes from the date — October 21, 2015 — which was the exact point in the future to which Doc Brown and Marty McFly return in Back to the Future Part II. Even though the film was released in 1989, it has managed to get a startling amount of predictions right. Let’s take a look at some.

Okay, so maybe the film didn’t get this right in the sense that it had all of us in flying cars just as commonly as we’re in the land-based variety, but it still managed to nail the concept. As of 2015, there are many companies actually working on this technology and selling so-called “flying cars” on the small scale. Most of these are more like personal aircraft and are way more limited than what was foreseen in Back to the Future Part II, but it can be done. If we were you, though, we wouldn’t get too excited about the scaleability. Millions of flying cars would create an air traffic control nightmare and would be a huge public safety hazard. After all, human beings have proven they’re not that good at driving on land, with millions dying each year as the result of traffic accidents. They would also be incredibly noisy. Think living near an airport, but instead of being located a mile or two away, your house is actually on the runway and a plane is landing every 30 seconds.

Some of you who either weren’t around in 1989 or had just been born may find it hard to believe, but at one time video calling seemed about as crazy as the flying cars idea. Now it’s commonplace. We have FaceTime, Skype, and Google Hangouts (when it actually works). It isn’t unusual to see and speak to the person on the other line. While we wouldn’t say it’s the “ordinary” way to call, it happens often enough that we’ve stopped thinking about it with a “wow factor.” In Back to the Future Part II, it was a pie in the sky idea.

On this one, the movie is getting extremely close to being correct. Recently Hendo rolled out its working prototype hoverboard, which allows the rider to skim along the surface while one inch off the ground. Unfortunately, it can only work on copper surfaces at this time, so this idea isn’t quite ready to become a consumer item, but it has arrived. Another company named Lexus has done a hoverboard of its own, but again, it’s magnet-based and requires a magnetic track for travel. So, TECHNICALLY, Back to the Future Part II gets a thumbs-up on this prediction, though like the flying car, it isn’t quite where it needs to be for practicality.

This is one the movie got right big-time. Drones are now a consumer item. You can connect GoPro cameras to them and spy on your neighbors. You can deliver stuff over short distances. You can take them out flying for fun. At the military level, they can even be used for combat strikes without having to jeopardize a soldier’s life. Civilians living near the target sites, however? That’s a whole other story. Expect this technology to become an increasingly significant part of your life in the next 50 years, for better and worse.

Okay, so weather people aren’t ALWAYS right these days, but thanks to satellite technology, they are able to predict weather with far greater accuracy than they could in 1989. It was not unusual in a place like, say, the midwestern United States, to dress for fall and get a ton of snow dumped on them back in the day. That doesn’t happen as much any more. And if a weather person is wrong about a prediction, they usually know it far enough in advance, so the viewing audience isn’t caught off-guard.

In Back to the Future Part II, two children think Marty McFly is old school because he “uses his hands” to play a video game. While the game controller is still very much alive and well in reality 2015, gesture-based computing is much more of a thing with Nintendo, Xbox, and Apple, getting in on the fun, to name a few. Touchscreen technology is a part of our everyday lives, and it just feels “normal” now as opposed to “futuristic.”

Marty McFly’s self-drying clothes? Not as crazy as it sounds. Clothing and other forms of wearable technology are much better equipped to interact with our lives. In 1989, this was nonexistent, but today, a watch can tell you how many calories you’ve burned and electronic components are even getting built into a lot of specialty clothing. Don’t believe it? Just check out this piece from Gadget Review that highlights 13 pieces of high-tech clothing now available.

From an education standpoint, why should anyone care about “Back to the Future Day”? Because it shows that science and creativity need to have a relationship if technological advancements are to continue progressing society in a positive direction. People like Ray Bradbury and George Orwell as well as films like Back to the Future Part II can show us what we’re capable of in both positive and negative manners. By paying attention to the speculation and the lessons they try to teach us, we can figure out how to chart our own visionary course in education and life in general.

Are there any movies or television shows other than the film series referenced above that have impressed you with their abilities to predict the future? Share what some of your favorite “predictions” were from popular entertainment in the comments section below!