Unpaid Internships: Should You Or Shouldn’t You? 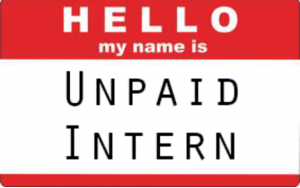 The dreaded unpaid internship. Why would anyone want to expend the effort and the time to do anything unpaid? Didn’t slavery and indentured servitude go the way of the dinosaurs?

All fair questions, and to be as open as we can about it, the answer to whether you should entertain unpaid internships or not can be found when weighing the pros and cons and stacking them up against your personal experience.

While no one can make the decision for you, we can give you everything you need to know to make the right decision for yourself. Let’s start on a positive note by examining the pros — great reasons to take that unpaid internship.

You make the right connections with unpaid internships.

Building connections is a necessary part of life. While it may seem unfair that you might be more qualified than another candidate, but they will ultimately get the job because of who they know, try to put yourself in the employer’s shoes.

Would you rather go with the known or the unknown quantity? Sure, you may get a diamond in the rough going unknown, but money’s involved so why take chances, especially if you value what you know about the other candidate’s work ethic and experience?

Of course you would rather hire someone you know in such a scenario as opposed to someone you don’t. It not only makes good sense, it will, nine times out of 10, be good for your dollars and cents.

Agreeing to an unpaid internship at the right location will definitely give you the inside track to work somewhere you can be proud of.

You gain a deeper knowledge of your field with unpaid internships.

So, you’re not making any money. Frustrating as that seems — especially if you’re logging six-, eight-, or 10-hour days — what you are actually getting could be worth far more than $10 per hour.

Taking unpaid internships will often place you shoulder-to-shoulder with some of the best people in their field. By working so closely with them, you can not only build a valuable connection for later in life, but you will also glean much of what they know, how they operate, and how they carry out their position.

That type of knowledge … you cannot put a price on it.

Unpaid internships allow you to experience a new city and way of life.

Most unpaid internships are located in major metropolitan centers. If you have meals and/or room taken care of to where you can focus on just the position and life after work, then you could have the time of your life.

Just imagine the valuable life experience of going from a low population center to a place like San Diego or Los Angeles or Miami or Dallas or New York or Chicago. It will be a shock to your system in the best way possible.

Of course, it might be a good idea to save up as much money as you can ahead of time. Start six months to a year in advance of the unpaid internship, so you can actually find time to enjoy yourself in the downtime.

And on a related note, unpaid internships provide a crash course on the ‘real world.’

Heading to a new location for an unpaid internship will give you the closest possible experience of the real world this side of an undergraduate degree.

You will realize what it is like to work hard with little reward. You will be forced to live on a budget. You will see how office politics operate and how it truly does take more than just knowledge and an ability to do a job to actually be good at the position.

Last but not least, you will learn how to network and make the most out of all of your relationships.

With unpaid internships — or low pay — you work really hard for little to no compensation.

There is something very unfair about a billion-dollar company that won’t pay its interns very well. Either you get minimum wage or nothing at all while a top executive gets millions of dollars in a retirement package for not doing his job particularly well.

Something’s off about that scale.

If you are more interested in making money directly out of the gate and you are confident with your skills — confident enough to at least earn more as you grow — then unpaid internships can be too frustrating to bother with.

At an unpaid internship, you will often be responsible for the ‘grunt work.’

Obviously this reality will vary depending on what a company expects of its interns, but the bottom line is that most people in these positions don’t get to do the ultra glamorous stuff.

Chances are, the aspects of the job you actually want to do will be few and far between while filling latte orders at the Starbucks next door for everyone doing the “real work” is a more accurate expectation to have.

There are no guarantees.

Much is made of the connections you can make in an unpaid internship position, but at the end of the day, “can make” is not a guarantee of “will make.”

And considering that many take unpaid internships because they expect it will give them a leg up for a job they want at the company they are interning for, it can be doubly frustrating to work for free, essentially, only to find that it yields no long-term gains.

And yes, unpaid internships can stifle you from building your own thing.

If you have any entrepreneurship skills at all, then there is something irksome about having your time dominated for little to no money.

Unpaid internships do this, and in so doing, they can hold you back from making something for yourself.

One last note: ProPublica did some investigative journalism and analysis on the validity of unpaid internships. While we have already discussed many of the key points, there is additional research and insight at this link that you would be wise to read over and take into consideration.

Now that we’ve taken a closer look at the unpaid internship, what do you think? Is this a mode that would be worth your time for the potential long-term gains, or do you have better things to do while not seeing a lot of upside? Sound off in the comments section below.

[Featured Image by The Odyssey Online]