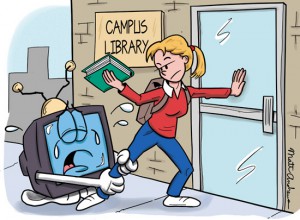 The difference between good test-takers and bad test-takers often boils down to the good study habits and prep time that go in to the days before the exam. While some will attest the best thing one can do is listen in class and do your best every day of school, you can incorporate smarter study tips for maximizing your scores. For some of the best suggestions, we turned to some seasoned studiers. Here’s what they had to say.

If you were graduating high school at the dawn of the Internet, then you had the privilege of seeing numerous technological developments unfold in a short amount of time. Where we are today compared to where we were in the days of dial-up is nothing short of staggering. It has led to numerous advancements and opportunities for good study habits to develop. But for PhD student Lucas Tambasco, they can do more harm than good.

“When you need to study for that big exam, you don’t want distractions,” Tambasco explained. “This is much easier to say than do. No Facebook, no Quora…, no Twitter, LinkedIn, Instagram, email, nothing. You should also try to turn off all your notifications, maybe by putting your phone in airplane mode.”

Tambasco continued: “Sometimes, you do have to check the internet for an assignment. And that Facebook tab is begging to be opened….If you can’t control that urge to check your friends’ latest status, you should consider Website Blocker (Beta) or StayFocusd for [Google] Chrome.”

Tambasco also suggests scheduling “a block of time to study.”

“Keeping yourself organized is very important, especially when you have that ‘hell week,’ with multiple exams, and homework and projects. You need to learn to prioritize your assignments, and to assign the corresponding time to each!”

To add to what Tambasco is saying, you should consider doing everything by the timer. With clock/alarm/timing functions on most every smartphone these days, you should set that timer and get busy. But remember to keep the device a safe distance away so it doesn’t become a nuisance.

We’ve also found that environment is everything when it comes to maximizing your study efforts. In fact, it continues to be a must as you get older and enter the workforce. Tambasco agrees.

“Some people love the library, some prefer their own rooms, some like to have music, some like complete silence. Personally, when I’m studying, I like to be in complete silence in my own room. I like to wear comfortable clothes, be in a place where I feel comfortable. In my room, I can also keep snacks for small breaks. But sometimes, this is problematic, because your bed is there, right next to you, begging for you to go lie down for just a second. This is totally a personal decision, so try different options, and find the one you enjoy the most.”

Agreed. (But seriously, don’t be anywhere close to something that encourages you to nap.)

4. Alternate Where You Study.

This is very much related to No. 3, but it deserves its own spot because, let’s face it, you can get burned out by your environment. Changing up the place where you study will keep your mind off guard.

As the Huffington Post offered in a recent article, “cognitive scientists suggest that alternating study spaces is a more effective way to retain information … Memory is colored by location, and changing your study locales increases the likelihood of remembering what you’ve learned.”

No matter what career course you plot, you’re going to run in to people, who are in the same boat as you. As HuffPo notes, “Never underestimate the power of your peers, especially when working through a difficult problem set or reading assignment. Dividing and conquering is an effective way to reduce your workload — and to make sure you understand the material.”

As studies become more challenging, you find yourself in a situation where accumulating knowledge very quickly becomes essential. And there’s a certain kick in the pants that studying with your peers can provide that may be more inaccessible when all you’re doing is listening to the instructor.

A recent article in the New York Times points out that studying a little each day has a much more positive effect than cramming. As NYT writer Benedict Carey notes, “When the neural suitcase is packed carefully and gradually, it holds its contents for far, far longer.”

“An hour of study tonight, an hour on the weekend, another session a week from now: such so-called spacing improves later recall, without requiring students to put in more overall study effort or pay more attention, dozens of studies have found,” Carey said, adding that “No one knows for sure why.”

“It may be that the brain, when it revisits material at a later time, has to relearn some of what it has absorbed before adding new stuff — and that that process is itself self-reinforcing.”

Dr. Nate Kornell, a psychologist at Williams College, adds: “The idea is that forgetting is the friend of learning … When you forget something, it allows you to relearn, and do so effectively, the next time you see it.”

Adding to what Kornell said, that’s a major reason why most cognitive scientists agree that practice tests and quizzes are valuable tools for learning, not just assessment. Carey writes: “The process of retrieving an idea is not like pulling a book from a shelf; it seems to fundamentally alter the way the information is subsequently stored, making it far more accessible in the future.”

When it comes down to it, there is no greater substitute for doing well on an exam than learning the actual material. To that end, what you study will differ depending on whether you are taking an ASVAB, ACT, or MCAT. But by employing the “smart” study habits mentioned here, you can take the information you’re supposed to learn and make it far more accessible. Which techniques have most helped you? Share your thoughts with us below!