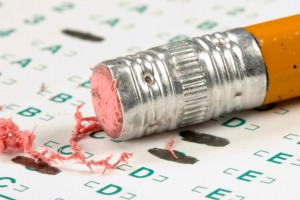 Standardized testing gets a lot of grief in the education community. (Some would say with good reason.) But is it really as bad as students and many teachers say? And should we consider abandoning a reliance on these assessments or continue to use them in an attempt to bring the system up to speed? For answers, we turn to the experts. Here’s what they had to say.

Yes To The Test, But…

According to education researcher Yvonne Kao, standardized testing should not be abandoned by education specialists because it “is necessary to measure and compare certain types of educational attainment across socially and geographically disparate populations.”

However, Kao believes that standardized testing is being misused and is in need of substantial reforming. “Leaving aside issues about states gaming the system or rampant cheating in individual districts, the fundamental problem with standardized testing today is the tests are being used for all kinds of purposes that they are not well-suited for,” Kao explained.

Kao points out that, while educators get composite scores along with subscores for each tested area, “simply telling a teacher that the students are terrible in the number sense … Is of limited help.”

“In order to improve teaching and learning, a teacher needs to know what types of errors the students are making,” Kao said. “Furthermore, the information comes too late (at the very end of the school year, and in some states, not until mid-August), so the test scores aren’t even used to make decisions about grade retention to help the kids who didn’t do well on that topic.”

For Kao, the interpretation of standardized test results lacks a straightforwardness that is necessary to empower an educator’s teaching decisions. “While it is true that a school with high failing percentages is not promoting much learning, the converse is not necessarily true.”

“In my state, the content of the tests is extremely predictable. In some districts I have worked with, they have predicting the test content down to a science, devoting six to nine weeks to benchmark and practice testing, after which the teachers are presented with a detailed item analysis that describes which problem types the students are likely to fail. The teachers then drill those problem types. I have worked with schools with ‘proficiency’ rates upwards of 90 percent, but where the fourth-graders could not do single-digit multiplication. I have also seen cases where high proficiency rates lull administrators into complacency — because 98 percent of the students passed the tests, they are doing fine and do not have to evaluate or improve anything else.”

How We Define Standardized Testing Needs To Change

Education specialist Jason Becker quotes the following from author Daniel Koretz’s Measuring Up: “It [standardized testing] means only that the test is uniform. Specifically, it means only that all examinees face the same tasks, administered in the same manner, and scored in the same way. The motivation for standardization is simple: to avoid irrelevant factors that might distort comparisons among individuals.”

Becker feels that we should “absolutely not” did ourselves of this educational tool. “That’s ridiculous. In fact, most form of measurement which has any kind of stakes attached are standardized. This includes the in-class essay you wrote in your social studies class that everyone took while in school over one period that was graded with a rubric.”

We Expect Tests To Do All The Heavy Lifting

Becker is right to challenge haters of the test to think of a different, better way to address the issues that standardized tests cover. To this, Kao believes, “The education and research communities need to develop an entire portfolio of assessments that can be used for school and teacher accountability.”

“Standardized tests can play an important role as a quantitative baseline or ‘sanity check’ measure … But that portfolio should include some more subjective measures of teaching and learning, like teacher observations or student project portfolios, and also some other types of school performance/school management measures.”

“In school evaluation — as in all kids of research — it is good to see multiple types of evidence converging on the same conclusion,” Kao said. “Relying mainly on standardized testing for school accountability is going to skew our understanding of what is happening.”

Educator Betsy Weigle, a contributor at Teachers.net, feels that standardized tests are on the right track, approving “In defiance of nearly every teacher I know or have ever known….”

“Something tells me that testing, both formal and informal, is here to stay. We just haven’t come  up with a better way to fairly evaluate proficiency,” Weigle said. “Everyone will be  tested at some point — literally, ‘number-two-pencil’ tested, not just ‘life-is-hard’ tested — and best teaching practices must ensure that  students are ready for this challenge.”

Standardized Testing Is Great For Credentials

Peter Scheyer, educational contributor at Quora sees standardized testing as a more useful tool for credentialing rather than education.

“A credential has more value when more people understand what it means,” Scheyer said. “Using a non-standardized test automatically means that the test is less valuable to people who are not experts in the field.”

To illustrate his point, Scheyer uses a hypothetical. “You are a budding Picasso who wants to pursue your art. However, you are from a disadvantaged situation and can’t afford to attend art school. It is very difficult to prove that you are worthy of scholarship, or even admission, among peers who can spend more time and effort on grooming and traveling, applications and honing your art, because there is a distinct lack of a standardized test for artistic ability. This could be for many reasons, but for the purpose of our hypothetical the fact is enough.”

“Contrast this with a math or physics prodigy. Due to these fields having clear standards and testing mechanisms, you will be identified as a standout extremely early in life, and you will be eligible for many scholarships and special education programs based on your test scores. It will even be easier to convince potential sponsors to be your patrons, because a larger pool of patrons will be able to compare you more quickly with age-peers and see how outstanding you are.”

Scheyer continued: “The short version of this argument is, abandon standardized testing in favor of what? And how could a lack of standardized tests benefit students, considering that the quantification of students through standardized tests is the mechanism by which excellence can be recognized, as well as weakness improved, in fields regarded as valuable by the entities which fund schooling?”

While Scheyer was definitely in no hurry to rid the education system of standardized testing, he did see the limitations, pointing out that it often results in “only learning things that fit into existing standardized frameworks, and then only to metrics set as averages across the entire population, which screws the excellent students and encourages mediocrity in the rest!”

He encourages the following “fixes” to the system:

“Education could expand standardized testing into new fields (art, music, literature, English composition, etc), understanding that each student’s unique makeup is worth specialized support, and encouraging each student’s particular excellences while encouraging only mediocrity in ‘core skills,'” Scheyer said. “Standardized testing can easily be applied to fine arts, but honestly no one has really tried, except in historical aspects. This is due to no one wanting to stand out and say, ‘This is art, nothing else is art. If you do those other things you fail at art.’ Art, as the expression of creativity, is widely considered to be incomprehensible, yes, the direct opposite of standardized testing. However, the information collected by standardized tests gives a range of normal answers. It confers equal information to get a 0 percent on a 1,000,000 question test as it does to get 100 percent. With either one you need to know all of the correct answers to overcome the margins of error and achieve your standout score.”

2. Kids are only learning to metrics set as averages across the entire population!

Scheyer brings mention of the failures of the No Child Left Behind Act here, which “united everyone who had children going through schools hamstrung by it in hatred of it.”

“I’ll be more brief in addressing this one: there is no need to average children and then use all available funding to improve the worst performers, while ignoring the best. This is failed standardization at its worst, promoting mediocrity at the expense of excellence. Attempting to ensure that all educated children reach a mediocre benchmark may, perhaps at worst, result in success. How to fix it without removing standardized testing? Simple: repealment of the act, or expansion of it to include the above metrics for creativity and ‘weirdness.’ Either would do a great job of addressing the issue.”

3. Excellent students are being screwed, and only mediocrity is encouraged in the rest!

Scheyer points out that this logic has a built-in fallacy — that all students are either excellent or mediocre, at best.

“A much wider set of standardized tests, including in each the potential for weirdness using the above techniques, shows the wide variety of skill and aptitude in any tested population,” Scheyer explains. “My suggestion for this is that students who perform well on weirdness in any category be encouraged into that, and that students who perform well in normal fashions be encouraged in those areas, via less structured classwork in which every teacher teaches those who come into their classroom in a collegiate fashion — basic lectures, advanced students assisting lower students in performing on area-specific standardized tests, and advanced students also pursuing their own studies more directly under the teacher.”

Scheyer says that expansion of educational fields of study to include this ‘weirdness,’ or subjective subjects, would mean that standardized testing “would do much to ensure excellence is rewarded in fields apart from specialties, encourage a mediocre level of understanding in all students, and allow students doing poorly to actively subvert the fields of difficulty,” the latter of which he calls “a historically attractive choice for students of excellence and mediocrity alike.”

It’s hard not to agree with these contributors on standardized testing and its importance to the future of education. While the wrong emphasis is currently being placed upon it, there needs to be some clear standard for measuring and encouraging excellence, rather than simply bringing all students to a standard of mediocrity. That’s certainly no way to make waves in the ocean of global education.

What tweaks, if any, do you think should be made to the current standardized testing system? Does the US place too much importance on it, or does it simply misuse an otherwise useful tool for determining adequate learning benchmarks? Share your thoughts with us below!