Helicopter Parents: 6 Horror Stories That Students Have To Live With Every Day 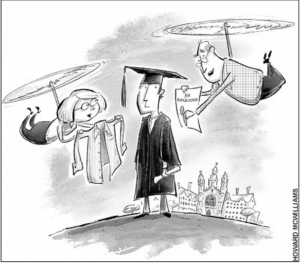 Helicopter parents are those bothersome, whiny Moms and Dads, who in a vain attempt to shield their children from the outside world, often make matters worse. Much, much worse. If you are the victim of helicopter parenting, then you have our sincerest sympathies. But for those of you who aren’t, get a load of just how awful some of these folks can be from the files of reddit. They can affect your success in school, work, and life, as you’re about to see. Let’s get started!

1. “When I was 7, I met my friend Sara. Despite meeting my parents multiple times, Sara’s mother showed up the day before Sara was supposed to come over to ‘interview and inspect’ my parents and their home, to make sure it was safe for Sara to come over. And gave my parents instructions (like baby proofing sockets – Sara was 8-9). She’d also just randomly show up for some play dates and stay the entire time, watching us play in my house.

Her mother came to school one day and pulled me out of class to tell me to stop giving Sara money for the milk vending machine because ‘the hormones in milk will kill her, and do you want to do that to Sara?’ (We had school from 8:30 – 3:30, and then after school stuff until 5:30, and Sara rarely had more than a sandwich and some fruit for the entire day). They also managed her meals, by making them up and laying them out in the fridge: breakfast, lunch, snack, dinner. Cupboards were locked.

“When we were in high school (age 14-17), Sara wasn’t allowed to leave school property for any reason. We used to go out for lunch and had to leave her behind (no caf[eteria] in the school). Despite only living about two blocks from the school in a really nice area, she’d have to wait until her mother got off work to pick her up – sometimes not until 6pm.

“She couldn’t go anywhere by herself, even at 16-17. If we went to the mall, her mother would follow us around, saying ‘Just pretend I’m your girlfriend!’ Same with movies. On the rare nights Sara was allowed to sleep over, her mother would personally visit around 10 – 11pm to check on her.

Her mother also had access to all her passwords, from MSN to Hotmail to some sort of dual-phone, where her mother would also receive Sara’s incoming cell phone calls? When you phoned Sara, her mother would listen on the other line.

They also found any and all reasons to ground her, so she wasn’t allowed to leave the house. Like, she was supposed to clean the kitchen every day from age 10 (from washing dishes after their meals to mopping the floor). Once she accidentally left a fork in the washing machine and was grounded for two weeks.

“Sara ended up drinking heavily during high school, went to university 6 hours away and has yet to come back. I wish her all the best.”

2. I work in HR at a large telecommunications company. We usually sit in the conference room and can see/hear the interview candidates while they are waiting in the lobby. This poor guy was probably 19 or 20 and his mother wanted to go into the interview with him. We actually had to ask her to wait outside the lobby, because even after being asked to sit down she said it was her ‘right’ to be in there. … Guy didn’t end up getting the job, and she later called and asked where she could send an appeal letter … wish I had saved that letter, it was intense.”

3. “I’m 24, and my mother will sometimes take it upon herself to start calling places ‘on my behalf,’ except without my knowledge or consent. A lot of the time, I end up having to contact the place when I find out and smooth things over. It’s humiliating and it makes ME look like an a**. … I have had several calm discussions with her about why she can’t do this sort of thing. I carefully explain that it’s not appropriate and that it reflects badly on me, I make some comparisons, and I ask her if she understands. She always says that she understands. Then goes right back to doing what she’s always done. … I no longer tell her anything unless it’s absolutely necessary (duh). But it’s not always so easy to avoid. For example, she knew which university I attended for 6 years so I couldn’t really lie about that. Plus I still have to live with her, I just graduated nursing school and I haven’t been hired yet.”

4. “I made a really great friend in high school. He and I were as thick as thieves. Early on in the friendship, my parents took us to a movie. I don’t remember the movie, but the start of it got delayed by technical difficulties by about 20 minutes. My parents called from their cell to let my friends’ mother know, but only got the voicemail. Thinking that would suffice, we all proceeded to have a good time. Fast forward to the end of the movie, my mom turns her cell phone on, and discovers her voicemail box is suddenly full (20 I believe was her limit). All of them were my friend’s mother pleading for us to return her son, and she would pay any amount we demanded, and that if we called back soon she wouldn’t go to the police … She literally had thought we kidnapped him. Suffice to say when we got him home only 20 minutes later than planned, the conversation was rather awkward.”

5. “There was a girl in my fifth grade class whose mother would take an hour out of her day to come supervise recess. Every 5 minutes, she’d blow a whistle and go ‘Emmy! It’s time for your shade break!’ And, just like clock work, Emmy would have to go sit in the shade for 5 minutes.”

6. I once interviewed someone for an entry level job. … The next day I got a follow up call. From his mother. This kid had not made the cut (he didn’t interview confidently and didn’t enunciate very well — not good for a call center job), but I hadn’t passed that on to HR yet. I told this woman a little white lie though — I informed her that he HAD been in the running, but since he can’t be counted on to do his own follow-up, he’s clearly not the kind of employee I want.”

If you know of or are the victim of helicopter parents, share your stories below. We’d love to hear from you!